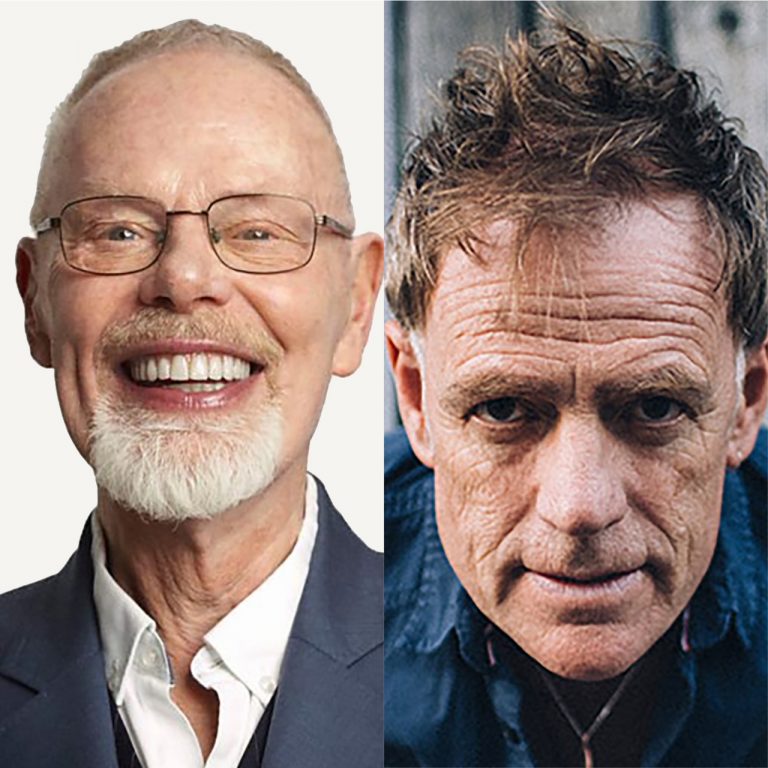 An intimate evening of story and song from Bob Harris’s 50 years in broadcasting and music. Accompanied by music from Martyn Joseph.

Whispering” Bob Harris, OBE has been at the very heart of UK music scene for the best part of fifty years. He has established a worldwide reputation as one of the most trusted and influential broadcasters of his generation – described by Radio Times as “…one of the greats of British contemporary music broadcasting” and by The Mail On Sunday as “a national treasure”.

Few people have taken as many bands into mainstream consciousness as Bob Harris – from his groundbreaking work in 1970s on BBC Radio 1 and the legendary Old Grey Whistle Test TV shows to his current programme Bob Harris Country on BBC Radio 2.

His guiding principle is the pursuit of excellence – reflected in the passion of his broadcasting and his devotion to the best music. He is a trusted guide and mentor to millions who have music at the centre of their lives. When Bob gives his support to an artist, people listen.

His tireless promotion of emerging and cutting-edge music has been second to none across a career that has seen him acknowledged by a series of international awards. In 2011, Bob received an OBE for his services to music broadcasting. He has twice been named International Music Broadcaster of the Year by Country Music Association – who also awarded him the prestigious Wesley Rose International Media Achievement Award in 2012. He is a fellow of University of Northampton, has received a UK Heritage Award, a Mojo Medal and was inducted into UK Radio Hall of Fame in 2009.

But, broadcasting is not the only string to Bob’s bow. He is also a respected and successful writer. He co-founded Time Out magazine in 1968 and currently has his own column in Maverick Magazine. In 2015, he published the second edition of his autobiography Still Whispering After All These Years which spent more than two months at the top of Amazon Music Book Chart.

Bob, his wife Trudie and their son Miles run the multi award-winning Whispering Bob Broadcasting Company – an independent boutique production house. WBBC curates and captures beautiful Under The Apple Tree Sessions in Bob’s own Apple Tree Studio – highlighting the best emerging talent from UK, US and beyond. The team have additionally made innovative programmes for BBC Four and SkyArts – including Bob Harris: My Nashville and the Back To…TV series and won two Sony Radio Awards for the radio documentaries The Day John Met Paul and The Sandy Denny Story both broadcast on BBC Radio 2.

As a familiar voice across the airwaves for half a century he is reassuringly knowledgeable and totally unique. He has enjoyed an incredibly prolific five-decade career (so far) and is as passionate about music today as he was as a small boy – hosting listening parties in parents’ basement.

“He champions the unknown, the obscure and legendary with equal zest and detail. He has stayed the distance, the good times and the others with character and resilience, always digging deep and deeper”
Robert Plan

Accompanied on the evening by MARTYN JOSEPH

Martyn Joseph is a completely unique and mind blowing artist. Take everything you think you know about singer songwriters….and rip it up. For one man and a guitar he creates a performance with a huge far-reaching sound that is energetic, compelling and passionate. Be it to two hundred people or twenty thousand, he blows the crowd away night after night.

He is gifted with the rare ability to speak to the soul with his expressive and poignant lyrics and has a career spanning 30 years, 32 albums, over a half a million record sales and thousands of live performances.

Compared to Bruce Springsteen, John Mayer, Bruce Cockburn and Dave Matthews, he has created his own style and reputation as a mesmerising live performer and stands in his own right, built on a reputation for giving what thousands have described as the best live music experience of their lives. A unique talent driven by passion, social awareness and love for his trade, he’s a jaw dropping guitar player who has developed a unique percussive style, teamed up with a powerful show stopping voice, and has been called “The Welsh Springsteen”.

Book tickets
£24 / £23 for the 1st 20 tickets
Ticket and Cancellation policy
Copyright © 2022 Stage4Beverley. All rights reserved.
We use cookies on our website to give you the most relevant experience by remembering your preferences and repeat visits. By clicking “Accept All”, you consent to the use of ALL the cookies. However, you may visit "Cookie Settings" to provide a controlled consent.
Cookie SettingsAccept All
Manage consent